Thanks for stopping by my site!

I’m currently a Lecturer in Shakespeare & Early Modern Drama and Literature at the University of Essex, in the Department of Literature, Film, and Theatre Studies.

I completed my PhD in Drama at the University of Exeter (UK) in June 2016. Currently, I am focused on my long-term practice-as-research project, Measure (Still) for Measure.

My latest article ‘Incomplete Dramaturgies’ is now out in Shakespeare Bulletin 40.1!

In 2022, I received Pro-Vice Chancellor for Research Strategic Funding through the University of Essex to run a series of practice-as-research workshops in April, May, and June 2022.

Throughout 2021, I co-authored a series of monthly blog posts reviewing Ian Doescher’s William Shakespeare’s Star Wars series of plays, with Arezou Amin. The first installment can be read here.

My husband and I recently launched an edutainment podcast called Not Another Shakespeare Podcast! The premise is to take neither ourselves nor Shakespeare seriously. In each episode, I introduce James to an early modern play, and he gives his honest (often hilarious) reactions.

I’m thrilled that my first monograph, Canonical Misogyny: Dramaturgies of Sexual Violence in Early Modern Performance, is now under contract with Edinburgh University Press! Look out for publication in 2025.

My main interests include: 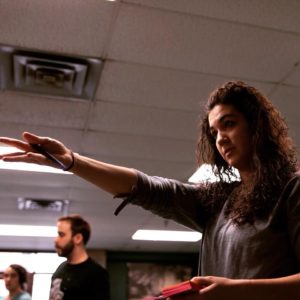 ⇒Performances thereof (both historical and contemporary)

For writing that isn’t quite academic, check out my blog.

Please feel free to email me or contact me through HCommons.